The Odyssey from the World of Autism 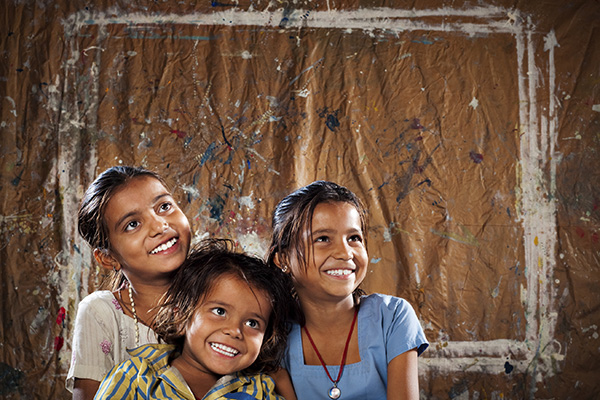 1. Autism – My first experience
Let me introduce myself as the proud mother of Niranjan, now 15 years old, who has overcome most of his initial disabilities and features of autism.
I also happen to be a Chartered Accountant with Legal qualification and Gold Medals in the Legal course and have stood university first throughout. I abruptly put an end to my career, when my son (then 1½ year old ) was declared to be not normal by a leading neurologist.

My utmost faith in the Supreme Power made me take this up as a challenge and renounced glossy career opportunities that the precious degrees for which I had struggled for years provided me.

The ‘why me ?’ did not occur to my mind. Neither did the cause of the problem trouble me. My mind worked only on one track. ” How do I set him right?”. He is my son. He ought to be all right. I could not accept any reason.
The bumblebee has very small wings. The aeronaut says that these wings are not made to fly. But the bumblebee does not know that and it flies.

2. The Struggle
From that day in June, 1987, I have struggled tirelessly day and night, consistently working on each area, one after the other. This includes all activities, from the basic acts of blinking the eyes, eye contact, to the tougher ones like speech and social activities. Most of the features of autism, which were seen strongly in him, gradually reduced and many have vanished.

All these have now faded and are almost invisible. The behavioral problems like pushing, shouting, throwing, laughing, beating have all disappeared with the structured behavior modification programs adopted.

What remains is the sensory aspect – which affects him for a certain period at times. These phases move unnoticed at times. But they could turn into a storm, if unattended or not structured.

After long years of nonstop optimistic hard work and monologues for almost 7 years, with no reaction from him, I am now proud to say that my son can demand what he wants. He could now talk to others, express his hunger or other needs very clearly. His speech is not as fluent as ours is. But he communicates freely with others and is clear about what he wants. He works well on the computer, using the keyboard or the mouse.

My son has had several obsessions, the most severe being the one for crackers. His obsession for sparkles and firecrackers can just not be even dreamt of. For almost 5 to 6 years, we dreaded the festival ‘Diwali’, because his obsession would never subside easily. Even a matchbox or scented stick would remind him of the firecrackers. By conditioning this behavior continuously, he has completely got rid of this obsession. He behaves like any other child of his age by bursting crackers during Diwali and then not mentioning it.

My son has never been on any allopathic medication. He has been on alternative medicines i.e. Ayurveda, Homeopathy, Magnet Therapy, Diet therapy, Reiki, Pranic Healing, Flower Remedy and Acutouch

3. Physical Education and its relevance
A lot of emphasis has been given to physical education, instead of academics. It has ensured the overall growth of my child. My son has learnt swimming, roller-skating, tennis, cycling and badminton. He is now learning horse riding and squash. He has learnt all these not just with a coach or with me but by attending classes with regular children.

We have definitely found some improvement with each of these courses. He has learnt Yoga and practises regularly. He learnt to sleep only after so many physical activities were introduced and Yoga practised. He has benefitted a lot by Yoga, as it improved his speech also. The first 7 years or so had been just sleepless nights, which was a nightmare.

The Governor of Assam [India] Sri. Loknath Misra, administered Mantra therapy for my son. The power of the Mantra was transferred to the water and he consumed it. The various fears of snake, darkness, new places, people etc. reduced tremendously.

I have practised with him the Doman-Delecato method. The creeping, crawling and patterning have helped improve his gait. He was very stiff once he started walking at 2 ½ years till almost 7 years. This gradually improved by playing games, exercises, swing, slide etc. The Balance Board helped him stand with legs together. Skating has helped him to learn to jump both legs off the ground, to get over the fear of falling down, to accept falling down and not make a fuss about it. He cycles well on the road, and is aware of the traffic around.

Swimming has helped him in his overall growth. The fear of water was so much that he just wouldn’t get into the water. But with the confidence instilled in him by the coach, he learnt swimming. He can swim even in the deep, though his stroke is not perfect.

He won 3 Gold meals at the National Meet of Special Olympics at Chandigarh, India, for roller skating and was selected for the International Meet at US in 1999. But due to local politics of the meet Authorities, he was denied his chance to go. But his very selection is a tremendous success.
I have now put him on horseback riding. This has made him straight, physically and mentally. His concentration and coordination seems better. He has now learnt to trot and also steer the horse using the reins.

All that he does today, have come to him, not easily, but with a lot of effort on my part and a lot of hard work and cooperation on his part. My determination to make him accomplish a task, and his desire to satisfy me and thereby trying to do it, have been going hand in hand.

4. Behavioral Cycles
What is more mysterious than autism itself is the behavior cycle that keeps manifesting every now and then. Whether it is typical of autism or how they are formed are not of interest to parents as these cycles horrify them. When we look at it for 24 hours a day, day after day, these questions don’t seem relevant. How do we tackle it and how do we continue our work with the child even during such strenuous periods? This is what strikes me as a parent.

According to research, something is said to trigger off the behavior. Hearing these words, the unfortunate parents spend a lot of time, analysing and worrying what caused it.

From the observations I have made, with the dozen children at school, and another dozen whom I meet at the various classes, and my son in particular, we find that the new moon and full moon are the main culprits of this behavior cycle. This is evident in most of the cases, as observed by us as a team, teacher special educator and myself.

The strangeness of the cycle is that it makes us wonder whether it is the same child.

It seems as though all the skills that we patiently taught him and which he mastered with difficulty, have vanished into thin air. Whether our toil has gone down the drain? Whether he would at all come to that level again? Even the basic skills that he could independently do previously seem to be impossible. Self-care, mobility, voice modulation, activity, understanding and executing commands all seem to disappear leave alone academics or deskwork. Attention seeking behaviors seem to be on the rise.

The alert parent would be the first one to notice the onset of the cycle. It takes a few days for the rest to observe it. But these initial days need immediate attention and the parent has to swing into action. If ignored, the behavior strengthens, magnifies and lasts longer.

So the various alternatives should be thought of. The innovative minds of the parent and special educator come into action. The behavior management adopted should be rigorously followed, even if there are no results. On the contrary, the child may seem to regress. But be sure that with the consistent efforts, the behavior loses strength and gradually fades.

To work as a parent of a child with features of autism is by itself a Herculean task. More so, during behavior cycles, when the child just does not cooperate and seems to be learning new behaviors. The parent starts doubting their efforts.

Be assured that with your persistent effort, the cycle disappears just as it comes from nowhere. The child will definitely start functioning at the level he was previously, and there is no going back at all. Your efforts will be rewarded.

Use new methods to challenge the behavior. There is no hard and fast rule or book to say the way each behavior is to be dealt with. It is your child. Think, think and find ways of reducing it and finally winning over it.

5. Parents are the catalysts
In the 15 years of hands on experience in the field of autism, I have found that each child is different, but the traits are the same. This is the unique design of God. But, whatever be the level of the child, and wherever the child falls in the broad spectrum of autism, one thing that remains unchanged is that the attitude of the parent and their involvement with the child matter a lot. Just as hard work and results are in direct proportion to each other, so is the case of the involvement of the parent and the improvement of the child.

Whether autism is curable is not the question that should strike parents. How normal are we going to make him? This lies predominantly in the hands of the parents. The work of the special educators and professionals are of great value to the child. It can be accelerated only if the parent at home follows it for the remaining 20 hours or so every day.

There is no question of whether we are made for it or not. The attitudinal change needs to take place.

The answer to all these is No.

What then is the role of the parent?

6. Role-players in the Progress of my Son

Today, we have a totally happy and calm son. We value this above all and are grateful to God for this priceless gift that He has transformed.

Special credit to all the people who have stood by us to help us reach this stage, has to be given.

7. Try All Buttons till You Succeed

All that I have penned now are all that I had practised that I am practising and will continue to do in the future. So it is not just preaching. It is practice that has been put to writing. All that I have done for my child in the past 15 years have happened after a very difficult transition but conscious decision to change for his good. It is difficult. But remember it is your child.

After years of struggle, it is bright to know that we are on the way to progress.

Both of us, Niranjan and myself, still have a long way to go. But I am sure that God will continue to send more and more people at every time of need to make us move forward. He has brought us this far and will see us through.

My job does not end with my child. If my experience could be of use to even one parent, who is groping in the dark, my life ambition is achieved. It is this intention that has made me write this paper.

8. The Beginning
I do not wish to call my signing off as the conclusion, as I believe that it should mark a dawn of a new beginning where there would be