It’s all a question of perspective 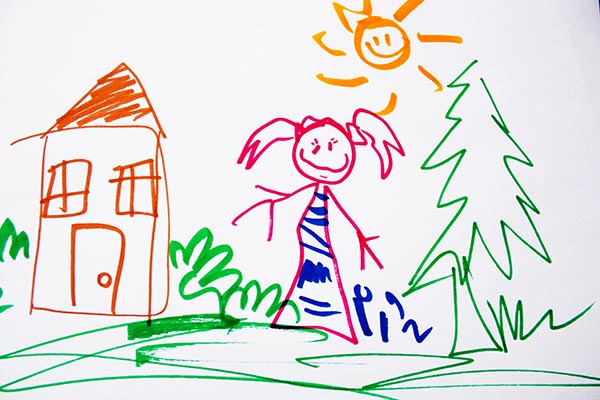 My three-year-old son Nikhil and I were doing his homework. The assignment was to join two dots with a straight line using a pencil. He couldn’t do it. That day we clung to each other and cried in frustration and anger. He was a low birth weight baby 1.5-kg at birth and most of his problems were attributed to that factor. His milestones were late and I was assured by doctors and experienced mothers that he would catch up! In a sense he did, he learned to walk and talk although a little late. We were not significantly worried because we didn’t think he had a major problem. We always felt that whatever he may or may not have would improve with time. I was in fact proud of the fact that he was so active (that should read hyperactive) and I would be amused by his quirks of straightening out the bath mats, closing all open drawers and arranging the shoes in a particular neat order. Then again he was paranoid about certain things and would run out of the room in case a dragonfly, moth or insect fluttered into the room.

He could not tolerate any loud noises. For quite a while I didn’t realize that his behaviour indicated something more. When Nikhil was around seven, one of the doctors suggested that we have him evaluated by a psychologist. It was a shock because though we thought his behaviour was quirky, we did not think that it needed intervention. Dutifully we had him evaluated and he was diagnosed as having Attention Deficit Disorder and mild Autism. We came home with this diagnosis but not much wiser because there was not much of concrete intervention suggested and we didn’t really know what to do. Even then it didn’t seem so bad because Nikhil was nothing like Dustin Hoffman in “Rain man” and that is all the exposure we had to Autism. My son has an uncanny memory for certain items such as vehicle numbers, railway timetables and directions and my husband felt this did not go along with his autism. I specifically recollect an instance when Nikhil was probably four or five. I had gone from Bhubaneswar to visit my sister in Delhi and after we finished shopping, we realised we could not find her car in the parking lot as she was momentarily unable to recollect the number of her new car – a white Ambassador. On an impulse I asked Nikhil and sure enough he was able to remember the number of the vehicle in which perhaps he had traveled just about once or twice. I am sure he still remembers the number of all the vehicles in which he traveled to school. On another occasion he proved that he was right and that we were wrong by correctly stating some unknown feeding habit of the pigeons which he had read in a book. I really think like the ostrich, we believed that his problems would go away and that he would grow up and that his attention would improve with age. As time went by things didn’t improve, they only got worse.

There were a few incidents of inappropriate behaviour in school and he started doing badly in Mathematics. This time we went to a psychiatrist who suggested some medication and some strategies which we could use to help him. We tried them but none of this really worked. As he grew older his quirky behaviour became more glaringly obvious. He was unable to socialize and get along with his peers. His poor coordination and inherent clumsiness meant that he could not do well in sports and games. He was being teased in school and was called many names. He was unable to communicate his feelings to us and we really hadn’t a clue as to how bad things really were. Often we would come to know of these instances only from his sister rarely from Nikhil. His academic performance in school started deteriorating and he started doing badly in subjects which he was normally good at mainly because of his anxiety about Maths. His performance in Maths was erratic in the sense that questions which he had solved in the morning would totally fox him the same evening. A few tutors to whom we went stated that he could not benefit from extra coaching as he seemed to know the subject. In any case Maths was a bugbear and it was tremendous blow to him when he was asked to repeat class IX because the school felt that he would not be able to cope with the X class Board exam.

His self esteem which was always low plummeted to a new depth. At about this time we were introduced to a counselor who helped him a great deal. He began opening up to her and soon he was able to verbalize his feeling to us as well. She helped me to a great extent to understand what was going on. She also informed us about the National Open School (NOS) programme. We relocated to Chennai and Nikhil joined a regular school . After a few months the teachers suggested that he enroll for the National Open School programme where he would have the option of dropping Maths and this would help him overcome some of his anxiety about studies. The school took a special interest in him and the teachers coached him for the NOS X class exam which he took in April- May 2000. He did extremely well in the examination and in fact stood first in the center in which he wrote. It was a tremendous boost for him. Though he still suffers from lack of confidence and low self esteem, this achievement has gone a long way to proving to himself that he is capable of doing many things. He is now more relaxed, at peace with himself and with people around him. He seems to have largely got over some of his other earlier phobias like his fear of flying objects inside the room and is also studying well. Even with regard to Maths, my husband feels that his problem lies not with his ability to grasp the subject, but with his inability to apply it to a problem. He does not seem to be able to do the simplest of problems, but at the same time he can mentally work out batting averages of cricket scores correctly to the decimals. Nikhil however has decided that he has no further need for Maths.

Nikhil’s interests today are focused on specific topics and he is a voracious reader. He is interested mainly in books and articles on facts and figures but does not seem to be interested in fiction. He loves watching cricket and the news on TV and generally reels out statistics on cricket and the weather. We are no longer surprised when we find him sitting for hours with either the Medical Encyclopedia or the Railway or Airline Timetables. At the special school which he is attending, they tell me that he is more sociable and does mix more with his peers. The school is considering putting him on an advanced comprehension course. He has very strong convictions about rules and this in some ways compounds his problems a he cannot imagine that there are shades of gray to some situations and that everything cannot be only black or white.

In all of this I have swung from the depths of despair to the heights of elation. I have blamed myself for his being Autistic and now he has a new title of having Aspergers Syndrome. I tried very hard and tried many things. He must have sensed my helplessness, frustration and sometimes anger. I think it must have been difficult for him. I finally let go and let things take its course. I stopped fighting with what I thought fate had handed me. I accepted Nikhil for what he was. I stopped looking for miracles and really took a look at him. I stopped thinking about what he couldn’t do and started appreciating what he could. This shift in my heart is I am sure felt by him and he is doing better. Nikhil is a pure, innocent good person totally devoid of any ulterior motives.

How many of us can say that about our teenage children. There is a theory that we choose our parents because of that something special that they can give us. I am blessed because Nikhil chose me.